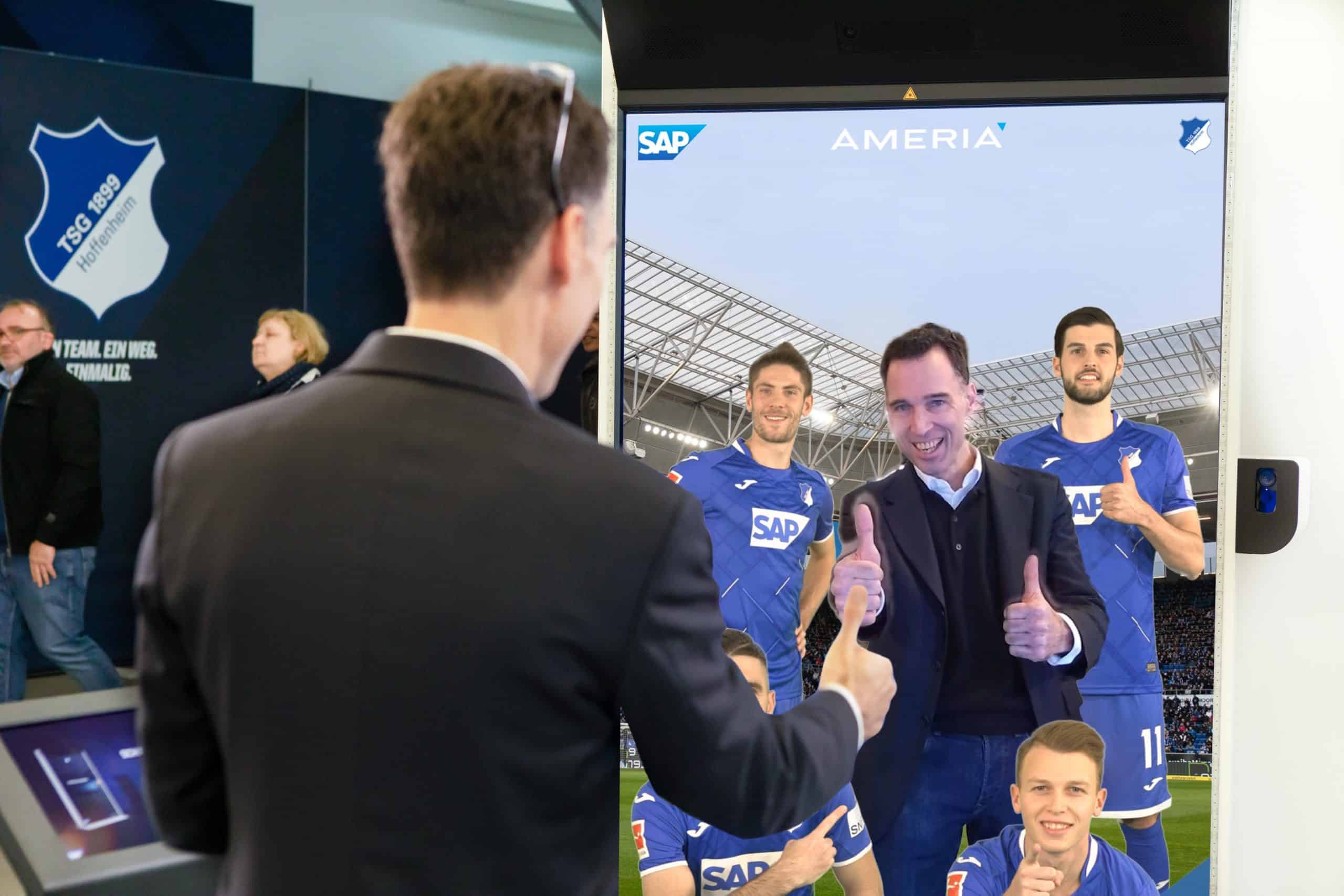 01.03.2020: The Virtual Promoter of the AMERIA AG inspires football fans and marketing experts with its first assignment at TSG Hoffenheim.

Soccer Bundesliga club TSG Hoffenheim has a spectacular new addition: After Munas Dabbur, the Virtual Promoter is now also on the team of “the Hoffenheimers”. The interactive display was developed and trained by AMERIA AG in Heidelberg. The superstar among the interactive displays could now prove its extraordinary abilities on February 1st in Sinsheim.

A selfie with the TSG pros – welcome to the team!

The first thing you see on the Virtual Promoter’s huge display are three players from TSG Hoffenheim. There is an invitation: “Take a picture with your stars!” The Virtual Promoter has an integrated photo box, where everyone can take a selfie with the TSG professionals. Via a terminal next to the display
you are instructed to take your personal photo in a few steps.

Just touch the touch screen on the terminal and off you go: First you choose your four favourite players from six Hoffenheim players. Then you step in front of the Virtual Promoter and see yourself standing in the stadium in full life size on the display. Even the stadium atmosphere is imitated 100% realistically. But now the trick: The four selected players join in, take you into their midst – don’t forget to smile – and the camera shoots the selfie.

After the snapshot you enter your e-mail address at the terminal and the selfie will be sent directly to your mobile phone. Now you can share the spectacular photo with your favorite players via social media.

A definite wow-effect for every fan

The Virtual Promoter really does a good job and inspires the fans all around. But that’s not all it can do. Because in the background, it also inspires all the marketing experts present by processing the data obtained from the fans and creating precise customer profiles.

AMERIA AG plans to equip the Virtual Promoter with additional features for every home match of the club: In the future, fans will not only be able to shoot a selfie, but also create a whole Instagram story.

The Virtual Promoter is used in this form with photo box feature and stadium atmosphere exclusively at TSG Hoffenheim. But the technology and the apps running on the Virtual Promoter can be individually adapted to each company. Many companies already use the development of AMERIA AG in local business, in showrooms or at trade fairs – for example John Deere, TUI Cruises, Haribo or Porsche.

You can learn more about the Virtual Promoter’s steep career at www.virtualpromoter.com